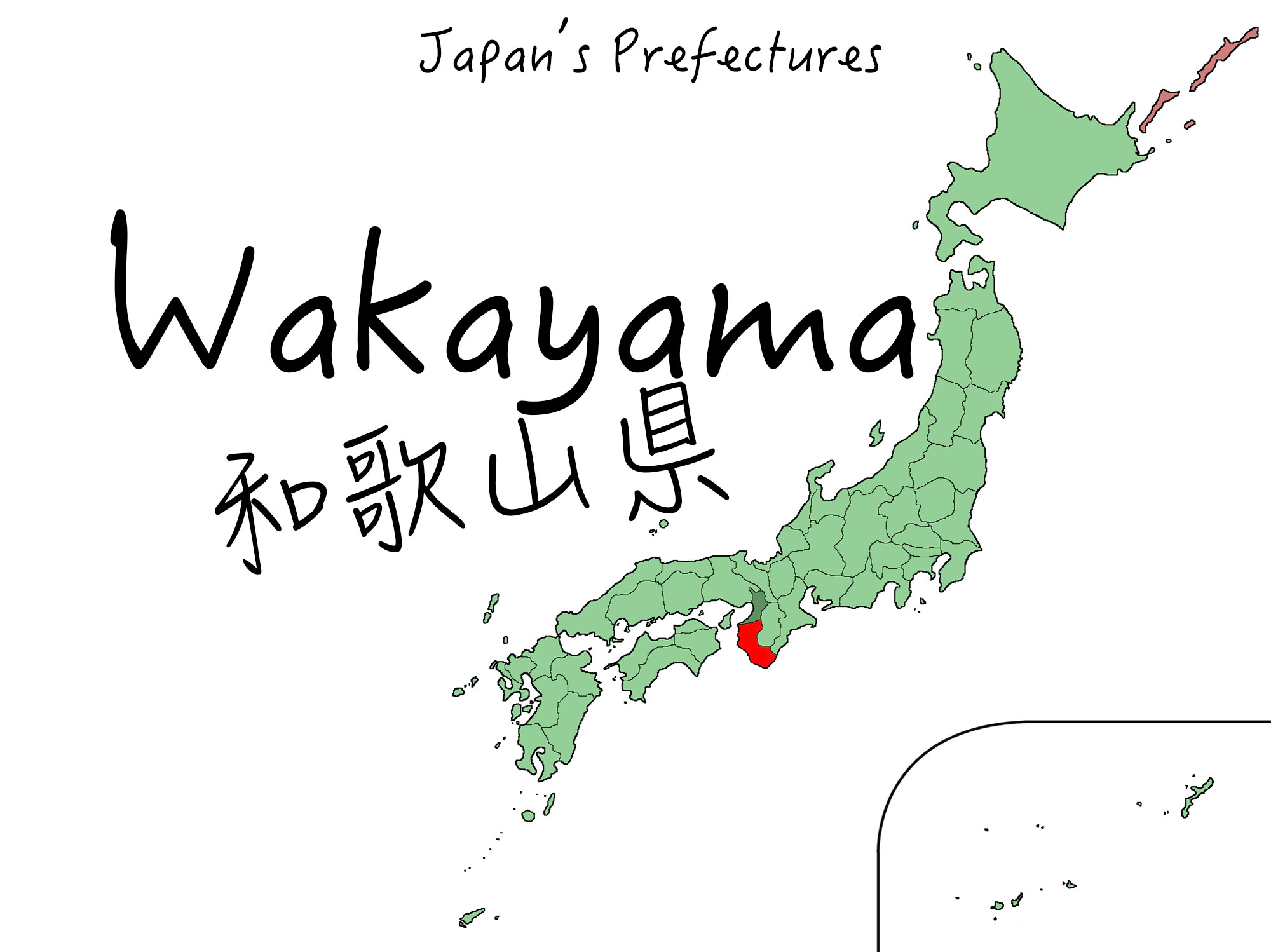 Wakayama Prefecture is a visual delight amongst Japan’s scenery. With 600 kilometers of coastline and Shirahama beach and onsen town, lush mountain regions, and a historical significance, it’s known as a very tranquil and peaceful place. Mount Koya, world famous as a place where you can stay at a monastery and live like a monk for a few days, is a UNESCO world heritage site popular with local and foreign tourists alike. Wanting a spiritual holiday? Try the Kumano trail, a pilgrimage trek to various temples including Mount Koya.

Wakayama Prefecture is just 100 kilometers south of Osaka, accessible by express train  (stopping at Shirahama) or by flying to Nanki-Shirahama airport. Wakayama City is also accessible from Osaka by train, as well as by ferry via Wakayama-Tokushima port. 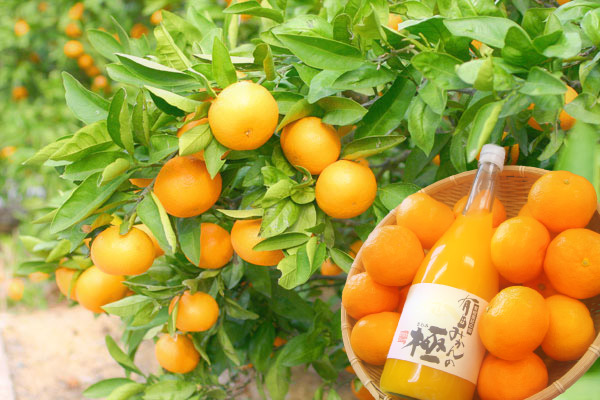 Wakayama Prefecture is a huge producer of oranges, and even has its own brand called Arida. The Arida district has grown oranges for more than 400 years and produces around 50% of all oranges from the prefecture. On a national scale, Arida produces about 10% of all oranges in Japan.

Many of the fruits that are produced in Wakayama Prefecture are done so on farms that you can actually visit! Picking fruit is always a pleasant way to spend a family outing, or a solo adventure to reconnect with nature.

Japanese plums, known as ume in Japanese, are another big agricultural export from Wakayama Prefecture. About 70% of all ume in Japan are from here. Salt pickled plums, umeboshi are commonly found on top of plain white rice in bento boxes. Personally I’m not a fan, but I do enjoy a glass of umeshu, plum wine. For some the flavour is like cherry – a flavour that will either be loved, or described as tasting like medicine!

Wakayama actually produces so much fruit it’s known as the Fruit Kingdom. Almost all of the fruits (including strawberries, pears, persimmions and the ones we’ve already mentioned) are made into jams and marmalades, packaged up for souvenirs, and put into unique local desserts.

With such a big coastline, there’s definitely good seafood in Wakayama Prefecture. The local sushi variety, which comes in a few styles, is easy to find and delicious. The first type is nare zushi, fermented fish pressed into rice and wrapped in persimmon leaves, and it is a really old school style of sushi. While the sushi we know today is raw fish, the dish actually originates from fermented (smelly) fish. 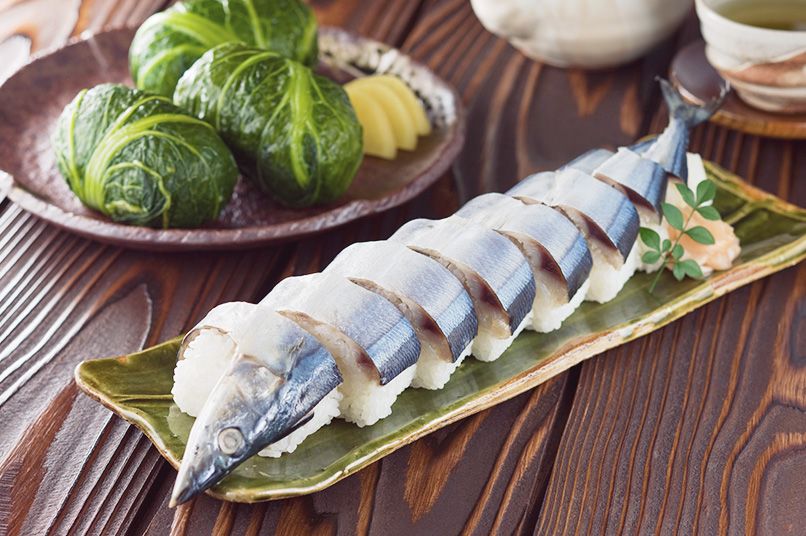 Meharizushi is another variety, this time it’s a rice ball covered with a pickled mustard tree leaf (known as takana in Japanese). The pickled leaf and the plain rice create a balanced flavour, and an easy, cheap meal. Thanks to this, it was often eaten by people who worked in the fields or the mountains since it was easy to carry. These days, if you do the Kumano Kodo trek, you’re likely to also eat meharizushi from bento boxes.

If you visit Kuroshio Market, you can pick up fresh seafood for yourself, or eat even more local specialties from skilled chefs. There are three tuna cutting shows a day, too, so go check one out! 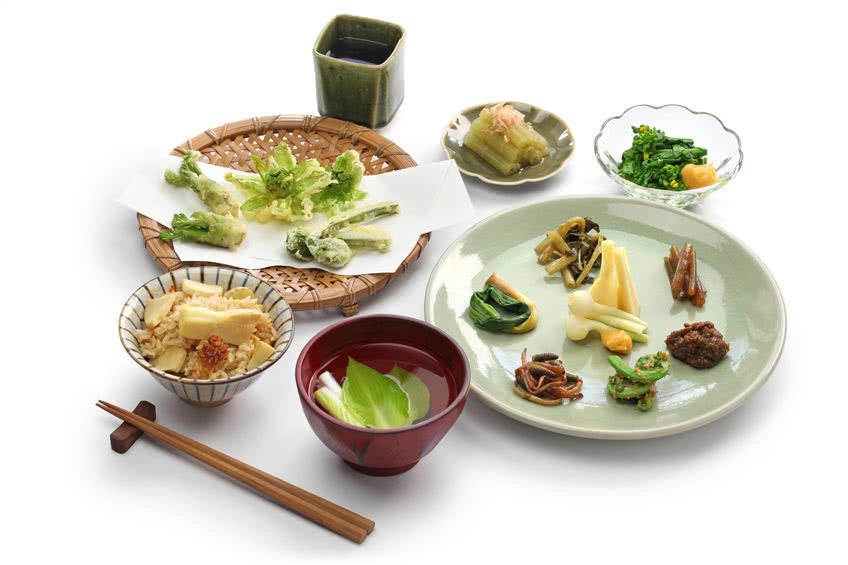 Speaking of Kumano Kodo and temples, if you visit one you’re likely to see shojin ryori, the food eaten by monks. The monks are not only vegan, they’re a very specific type who also do not eat pungent foods like garlic, onions, leeks, ginger, and a few other plants from the onion family.

The cuisine revolves around peace and tranquility, mostly made up of vegetables (of course) and wild edible plants that are found on the mountains. When you sit down to eat, you can expect stews, lots of miso, and very simple dishes that actually are pretty complicated behind the scenes.

The multi-dish meals follow the rule of always having five flavours and five colours, so you can always expect a good spread.

This might seem like a weird ‘food’ but I was really surprised to hear that there are a number of really key seasonings used in Japanese cuisine that originate from Wakayama Prefecture. 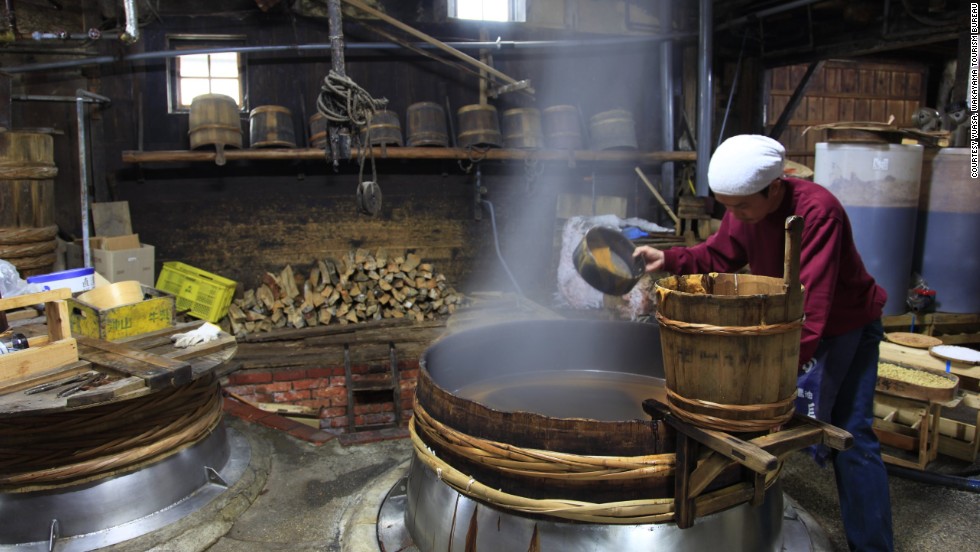 The first is shoyu soy sauce! It was discovered by a monk who was making miso paste during the Kamakura period. Yuasa, the town where it was made, once had 92 producers operating at once, all producing soy sauce, how crazy is that!

You probably don’t know the word sansho, but it’s basically a plant that has a peppery flavour. This flavour is extracted from the plant and used for a bunch of things – yakitori seasoning, in unagi kabayaki grilled eel sauce, and as one of the seven spices in shichimi, the red spicy powder that is often on your table in Japanese restaurants. 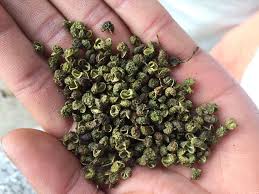 Bonito flakes are yet another seasoning that comes from Wakayama Prefecture. Used as a topping for foods like okonomiyaki and takoyaki, and as a base for dashi stock soup, bonito flakes or katsuobushi in Japanese are shavings of dried and hardened skipjack tuna.

Last up for our list of seasonings is Mazuma wasabi! Wasabi is, nowadays at least, mostly produced in Shizuoka, but if you manage to find wasabi from Wakayama Prefecture consider it a real treat! It was once quite abundant here, but now is somewhat rare and expensive to find. It’s said that the original cultivation of wasabi was started in Mazuma village around the year 1887.