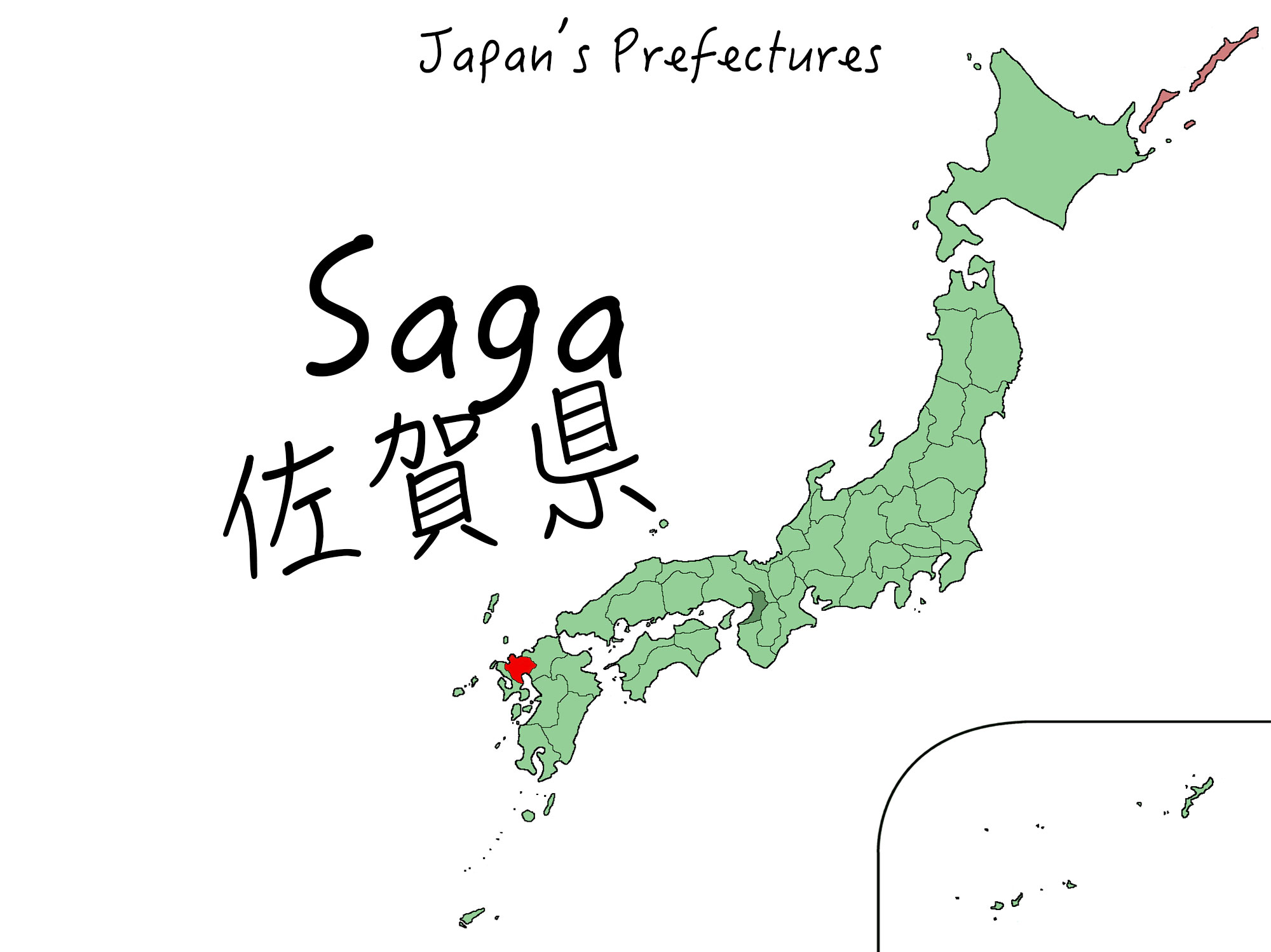 Not far from last week’s post about Oita Prefecture is Saga Prefecture. Located on the southern most island, Kyushu, Saga has a rich history in craftsmanship and particularly in ceramics. It’s also split up into distinct East, Central, North, and West areas. You can get the Kyushu Shinkansen to Shin-Tosu Station and then travel around the prefecture using three different railways, JR Kyushu, Matsuura Rail, or Amagi Rail. Overall, it’s about 4 hours from Osaka by Shinkansen, or 2 hours by plane from Tokyo to Ariake Saga airport. Japan has pretty extensive highways as well, and they’re extremely beautiful so don’t rule out a road trip either!

The eastern part of Saga is dominated by nature, historical sites, and cultural areas. There’s a lot of temples and gardens, and if you’re a real history buff it’s worth checking out the remains of Kii Castle which is the oldest Korean style castle in Japan which was built in preparation for war against Korea and China in 665. There’s a lot of tours and walks you can take around the grounds too.

Once you’re all walked out, it’s lunch time! The East Area has two popular local dishes, ayabe botamochi rice cakes and Kanzaki somen noodles. Ayabe botamochi are soft mochi covered in red bean that are said to bring happiness and safety. Kanzaki City is the home of Kanzaki somen noodles, which are super thin (think thinner than angel hair pasta) and served hot in winter and cold in summer. If you’ve ever seen people scooping noodles out of running water then you’ve seen somen before. You can buy uncooked noodles to take home as souvenirs.

Being the central area means there’s a lot to do. There’s Saga Castle History Museum and a Confucian Shrine as well as the 75m tall Kiyomizu Waterfall and temple. There’s also some Edo Period buildings remaining and the Saga Prefectural Museum and Art Museum. You also have the beautiful Ariake Sea coastline from which Saga Prefecture sources a lot of its local seafood from, including producing the largest amount of nori seaweed in Japan. In particular, the mudskipper, shappa, warasubo, and agemaki are recommended by locals. For dessert, follow up with ogi sweet bean yokan from Ogi City which is made with sweet beans, honey and seaweed! If you like it a lot then you can actually go to a yokan museum too. If you’re not sure what yokan is, it’s kind of like a really thick jelly.

The north has even more sea activities than the central area, but it actually faces a different sea! You can access the Genkai Sea from the north coastline and have totally different seafood from here, with specialities like squid, sed sea bream, and marine products that can be bought as souvenirs. To really take in the ocean views, take a day trip to Mt. Kagami and have a view of the entire Niji-no-Matsubara pine forest, stretching 5km along the coast. This is also the site of the legend of Princess Says (a love story between a soldier and a village girl).

The north area has a strong desserts game too, with shoro manju cakes and amanatsu jelly. Manju cakes can be found all over Japan but they usually have regional flavours, and Saga is no exception. The flavours are inspired by the pine forest, and the cakes are baked with a thin wrapping of castella. The amanatsu jelly is made from locally grown oranges and the fruit skin is used as a mold for the jelly too, so when you cut the fruit apart you have jelly wedges!

So, you’ve been travelling around, climbing mountains, swimming in the ocean, doing all sorts of activities and now you’re a little tired. Where do you go? To a hot spring of course. Ureshino and Takeo hot springs are popular amongst locals and tourists with long histories. Finish up with a trip to the Mifuneyama Rakuen amusement park before you head home for some final fun memories, and finish your final meal in Saga with some real luxuries.

Ranked as high as Kobe beef is Saga beef, with only a light sprinkling of white fat throughout the beef, it’s melt in your mouth goodness without the guilt of Kobe beef. You can get this all throughout Saga Prefecture, not just in the west area. Try going to a proper beef house for the best cuts rather than less specialised restaurants. If you’re visiting between July and December, then get yourself some takesaki crab (blue crab). It can be cooked in salty water, miso soup, or in a rice broth for varying flavours. You’ll most likely be served a whole crab too, so arrive hungry! There’s literally a festival every month in Saga Prefecture, so it’s never a bad time to go, but try to find a calendar of events before you plan your trip to make sure you don’t miss out on something that’s of interest to you. Some of the most unique festivals are the International Balloon Fiesta (November), the Hot Spring Festival (4 times a year), the Great Tug of War in Yobuko (June), and the ceramics fair in golden week.

Where are we off to next? Leave us a suggestion! Don’t miss out on finding out where our next destination is by signing up to our weekly newsletter,