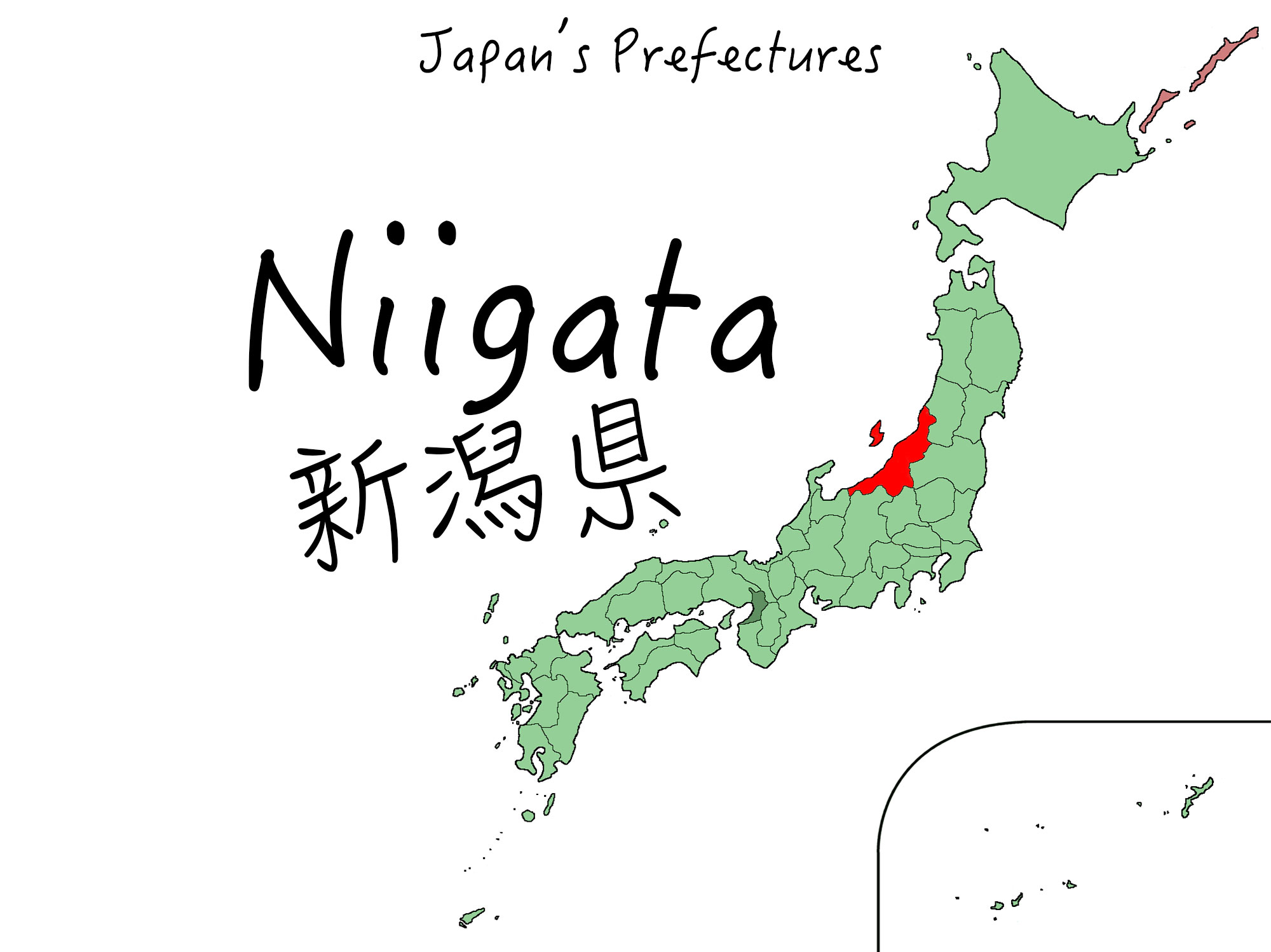 You’ll find Niigata Prefecture on the coast of the Sea of Japan in the Chuubu region of the main island, Honshu. You might know the capital city, also called Niigata, as the host city of Fuji Rock music festival, surprisingly nowhere near mount Fuji! Agriculture is the biggest industry here, but the prefecture is also well known as a skiing destination and the home of a number of large festivals. However, the snow plays a large part in Niigata Prefecture’s culture and in the local cuisine – vegetables are often stored in the snow which acts as a natural refrigerator. These vegetables tend to be sweeter and crisper than vegetables stored the conventional way.

You can get to Niigata Prefecture by shinkansen, by flying to either Sado or Niigata airport, or driving on Japan’s excellent but slightly expensive highway system. The production of rice in Niigata Prefecture is second only to Hokkaido and the brand Unomuna Koshihikari is an especially famous variety from the region.

As with all instances of high quality rice, you’ll also find good sake here. Senbei, Japanese rice crackers which come in an unmeasurable amount of varieties is found here as well. We suggest trying to find a street vendor who makes it hot and fresh for you, it’s super warming in the cold climate! There’s even a senbei museum, you can make your own crackers there and design them too. There’s not much else aside from this attraction though and the word “museum” is used pretty loosely however it is a fun activity. This is a stew dish that uses all the leftover bits and pieces in your fridge – but usually only vegetables! All the odds and ends are saved up and boiled in dashi together with sesame flavouring (usually sesame oil), then once they’re cooked a thickening agent is added and it’s served up. Most commonly found at festivals and during the New Year period, it’s a hearty dish that encapsulates Niigata Prefecture’s wintery culture perfectly.

Wappa is the name of a special wooden container in which your food is served. Inside you’ll find rice that has been cooked in a light dashi broth and topped with steamed seasonal seafood. It’s said this dish was developed in the early 50s and has become a Niigata staple ever since. High end places will cook the rice just over half done, then add the raw seafood and cook it all together, finishing off the rice.

Want hot soup and noodles but can’t decide between udon and ramen? No problem! Tsubame sanjo ramen has thick udon-like noodles, as well as a thick tonkotsu soup and added pork back fat (we see a theme here). It’s an intense bowl and probably isn’t for beginners but if you’re a ramen lover it’s definitely something that should be on your must-eat list.

If it’s not your style, there are some other local ramens including Niigata light ramen (niboshi dried sardines broth), a ginger-shoyu soup, a miso ramen, and lastly curry ramen.

Have you ever eaten inari sushi? It’s a pocket of tofu stuffed with rice and sometimes topped with other ingredients. The tofu pocket on its own is known as aburaage, and the name is shortened to just aburage in Niigata Prefecture. Tochio is a city in Niigata Prefecture, and there you’ll find lots of giant deep fried tofu – aburage! It’s easily double or even triple the size of regular aburaage, so it’s a great treat if this is a dish you already love, like me.

You can find this tofu as a side dish with a bowl of plain rice, or eaten on its own. If you have it at home, you can lightly pan fry it to crisp the outside and then eat it with toppings like bonito flakes and sauce.

We already said that the snow plays a big role in Niigata Prefecture, but this is the first example of it in their food that we’re presenting to you. Kanzuri is made in Myoko, and it’s a seasoning that’s made from togarashi chili peppers, flour, salt, and yuzu. The really special thing is that the chilli peppers are pickled in salt then spread out on the snow fields and left there to be bleached by the snow. This process is called yukisarashi. The chilli peppers stay outside for three or four days and this makes them less bitter and spicy.

Sometimes it snows while the chilli peppers are bleaching and they get completely covered in snow, so worked stick bamboo sticks in the snow to mark where they’re laid out. After this part of the process is finished, the chilli peppers are exposed to koji mold (also used in a bunch of other Japanese recipes, like sake!) then yuzu peel is added. This is stored for up to three years and left to ferment, then finally a paste is made out of it. Kanzuri seasoning is used in shabu shabu and as a sauce or dip for foods like yakitori.