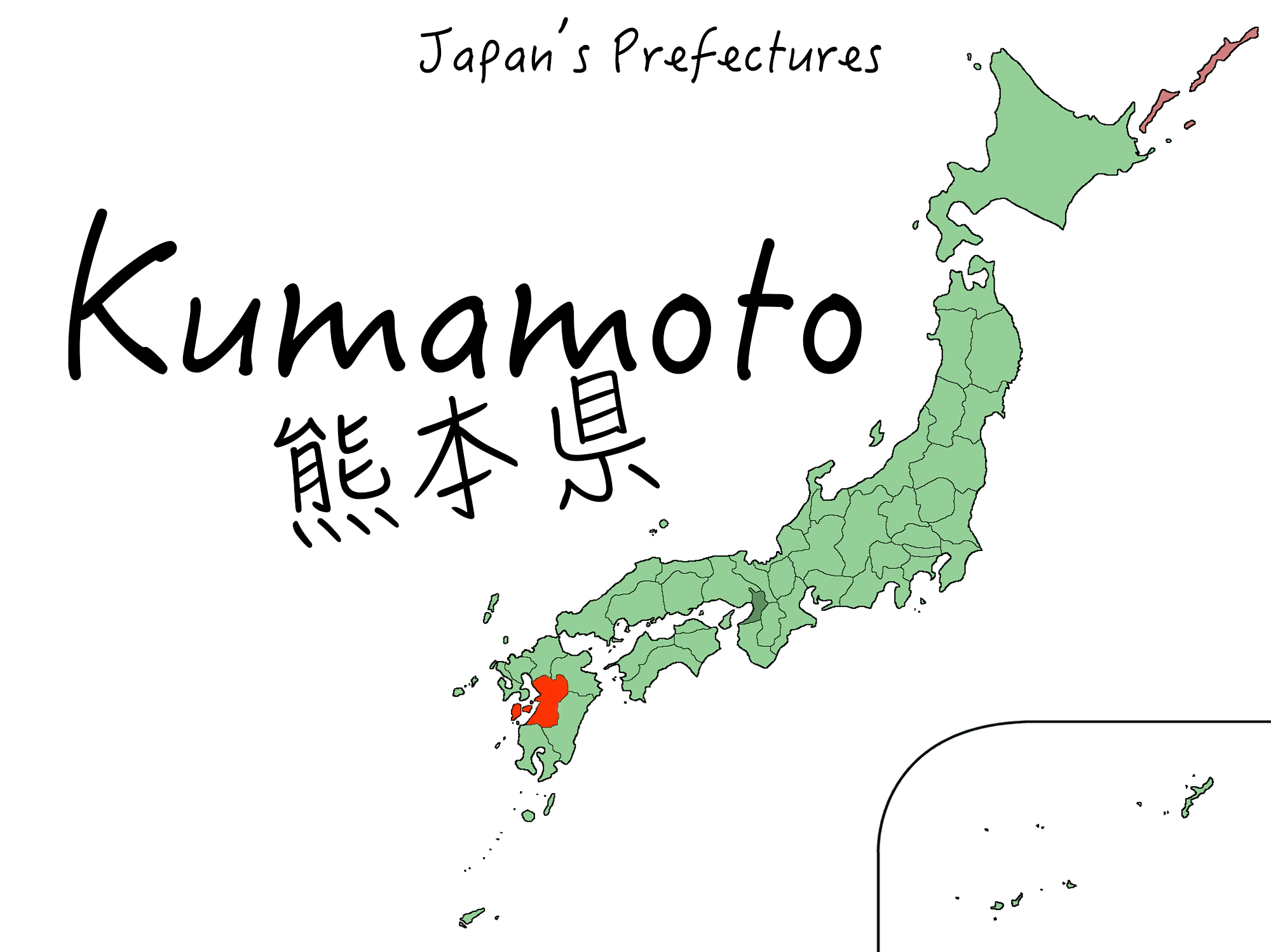 Kumamon is Kumamoto Prefecture’s mascot, and he’s incredibly popular not just in Japan but also on the internet. What might be surprising about the loveable black bear is that the mascot was only introduced in 2010! Kumamoto Prefecture is located in Kyushu, at the bottom of Japan. Some of the tourist attractions – aside from Kumamon – include Kumamoto Castle and Mt. Aso, a still active volcano.

You can reach Kumamoto by shinkansen bullet train or by flying. The island of Kyushu is also connected to the mainland by highways if you have rented a car! Something that turns a lot of westerners off is basashi, or…. horse meat. Served like sashimi (i.e. raw) horse meat is quite common in Kumamoto Prefecture. Popular dishes include sakura niku or sakura natto, which is thinly sliced raw horse meat served with natto, an egg, and mustard. It’s also eaten in shabu shabu.

This is a dish that I personally have avoided, but from what I hear, it is like a very lean beef.

Higo is the old name for Kumamoto, and there are a number of vegetables that are local to the region. These include beans, carrots, leafy greens, eggplants, and leek. They’re cooked in tempura, popular in bento boxes, and of course used for all the regular dishes where you find vegetables. Dagojiru is a local soup that utilises the vegetables perfectly. Kumamoto Prefecture was one of the first places to make furikake, a seasoning that comes in all different flavours and is sprinkled over rice. It’s said that furikake was invented by Suekichi Yoshimaru, a pharmacist, some time in the early 1900s. Originally, this product was considered a luxury item but it is now known as an everyday food!

Dango, sweet rice cakes with filling, have a local variety where the filling is sweet potato and red bean.

A blend of chicken and tonkotsu broth, the standout characteristic of Kumamoto Ramen is garlic! Fried garlic chips and garlic oil both top this soul food for a warming belly full of meaty garlicy soup. The noodles are usually medium straight, and the other toppings include all the regular ramen standards.

This is (I think) the strangest food that also seems to be one of the most popular foods of Kumamoto Prefecture. Karashi means mustard, and renkon is lotus root. The holes of lotus root is filled with mustard then the whole thing is fried.