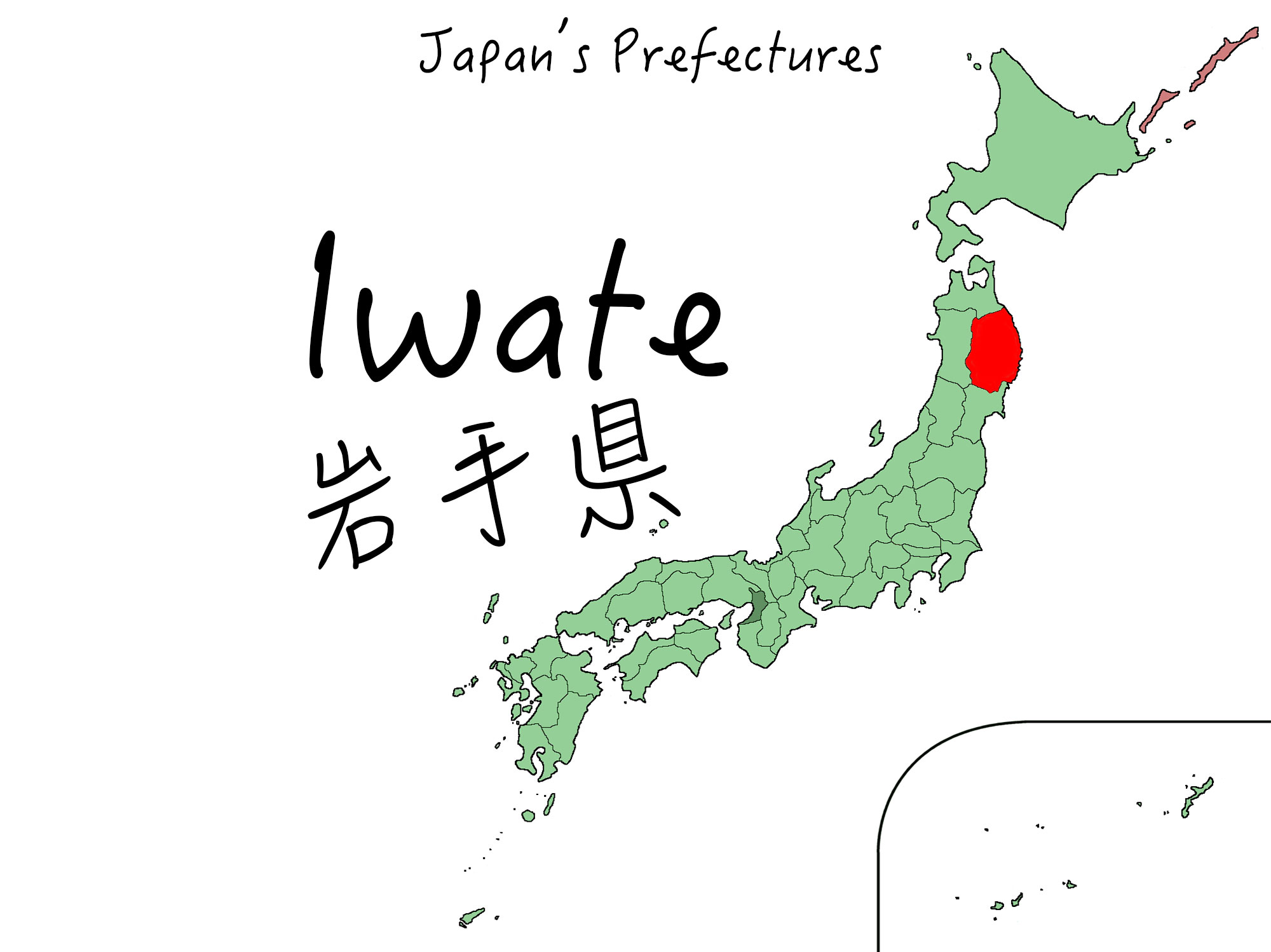 Iwate Prefecture is part of the Tohoku region of northern Japan. It’s the second least densely populated prefecture (Hokkaido is number one!) and has several unique tourism destinations, like Morioka Castle, Fujiwara no Sato theme park and movie set, and several major Buddhist temples. The prefecture has several local legends and myths, one of which explains the name “Iwate” which means “rock hand” in English. It’s said a devil was causing trouble for the locals and when he was finally punished for his ways, he left a hand print on a rock as a sign of his promise to stop. Iwate Prefecture was affected by the 2011 tsunami which severely impacted the local fishing industry, but the prefecture is coming back to life and is a great place to visit!

Tohoku is serviced by the shinkansen and several regional train lines with multiple major train stops in Iwate Prefecture, so it’s best to go to the station closest to where you’ll be travelling! You can travel by air to Hanamaki Airport, and there are three main ports you could travel by sea to.

Iwate Prefecture is coastal, much like the rest of Japan, but what sets their seafood apart is an abundance of sea urchin and abalone! These dishes are usually served up raw as sushi/sashimi and best enjoyed at Miyako Fish Market.

There, you can of course find fish mongers, but the surrounding streets and the small restaurants you find in them is where you want to eat.

Produced in the Maesawa area in Oshu City, Maesawa beef is Iwate Prefecture’s pride and joy when it comes to red meat – so much so it even has its own festival. Held every year on the first Sunday of June, this is where you’ll find bargain prices and a variety of cooking techniques.

If you’re there any of the other 364 days of the year, order it as shabu-shabu style hotpot, yakiniku barbecue, or as teppanyaki where the chef cooks in front of you! The beef is succulent and melt in your mouth and can only be sold through certified retailers so check up on any restaurant you go to to make sure you’re getting the real stuff.

Yoichi Street, which is close to Morioka train station, has a street market with plenty of food stalls. You can get local foods, varieties of kushikatsu (skewered and grilled foods), smoked foods, and festival foods like yakisoba or takoyaki.

We talked about jingisukan or “Genghis Khan” in the Hokkaido blog, it’s a variation of yakiniku barbecue that’s cooked on a dome plate instead of a wire mesh or flat hot plate. It’s named “Genghis Khan” because the dome shaped plate looks like a Mongolian helmet, and legend has it that the very first hot plates actually were helmets!

Lamb is a popular meat for this style of grilling, and you’ll get a cube of fat (either beef or lamb) to rub over the plate as a lubricant and flavour source. Keep your veggies around the base so the meat juices drip onto them and you’ll be a master chef in no time!

Iwate Prefecture is an all-you-can-eat heaven, especially if you love soba buckwheat noodles. Served in tiny bowls with one portion size being about one mouthful, wanko soba is often made into a competition between friends to see who can eat more as waitresses will just keep bringing more and more bowls as you eat.

It’s not unusual for men to eat 100 bowls and women to eat 80! This is one of the three famous noodle dishes from the area.

The second famous noodle dish is an udon-like noodle, served on a plate and topped with a meaty-miso paste, cucumber, and spring onions. When it arrives, mix it all up so the noodles are coated and slurp away! This dish is totally unique and delicious, it’ll without doubt become one of your favourite Japanese dishes after you try it!

When you’re 75% finished, ask the wait staff for the chi tan-tan soup to add to your saucy noodles. The soup is actually the water used to cook the noodles with a beaten raw egg mixed in until it cooks. It’s a very Chinese style dish, but a contender for your number one favourite food spot.

Nope, not ramen, it’s reimen! First served up in 1954, this Korean inspired dish has noodles in a cold beef soup with fruit and kimchi. Yep, that’s right, beef, fruit, and kimchi. The fruit is most often watermelon, but you can find other fruits around, and the kimchi adds spice to the whole dish.

If this isn’t your style and you’d like ramen, another local noodle dish is kimchi and natto ramen. Natto is fermented soy beans, and is like the Japanese equivalent of vegemite – you’ll either love it or hate it instantly.

Iwate Prefecture loves mochi rice cakes, both sweet and savoury. You can actually eat an entire meal with multiple courses where every course is mochi with a different flavour or topping!